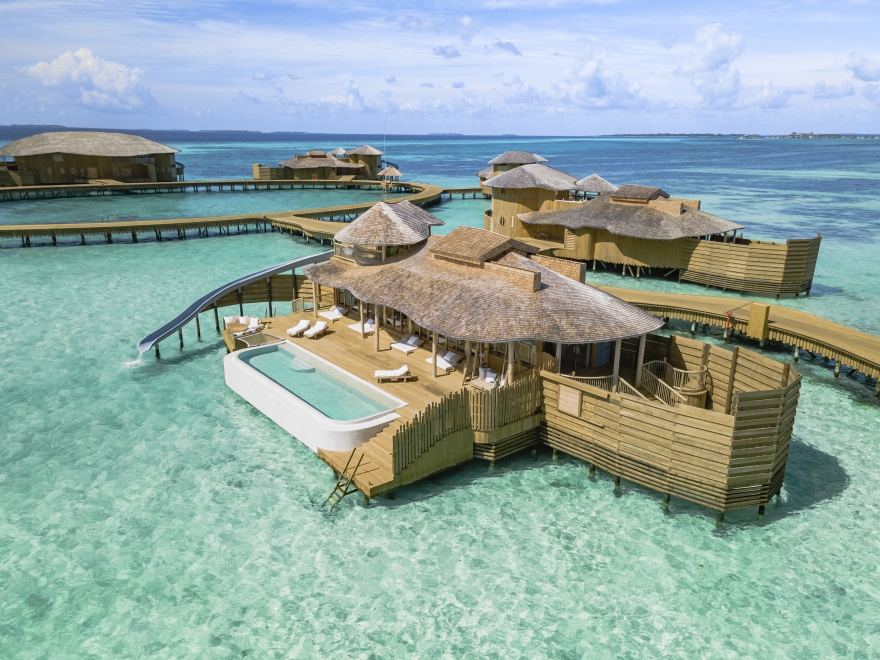 Soneva has announced a spectacular programme for Summer 2021 across its award-winning resorts in the Maldives and Thailand. Running throughout July and August, guests of all ages at Soneva Fushi, Soneva Jani in Maldives and Soneva Kiri in Thailand can get into the holiday spirit with one-of-a-kind experiences, dine on exceptional cuisine with Michelin-starred chefs, and meet acclaimed visiting experts through the ongoing Soneva Stars calendar.

Diners can enjoy exquisite Michelin-starred cuisine from a line-up of acclaimed guest chefs at Soneva Fushi over the summer months. French chef Stéphanie Le Quellec, known for her meticulous yet accessible cuisine at Paris’ 2-Michelin-starred La Scene, will be hosting an exclusive series of dinners at Once Upon a Table from 1st to 15th July. Award-winning Heiko Nieder, from the Dolder Grand’s 2-Michelin-starred The Restaurant, will be at Soneva Fushi from 21st to 30th July. Mark Lundgaard, Head Chef and Director at Copenhagen’s famed Kong Hans Kælder Restaurant, is at the resort from 17th July to 10th August. And Paco Morales, the 2-Michelin-starred chef at the forefront of Andalusian cuisine, will be at Soneva Fushi from 12th to 23rd August. Other mouth-watering culinary experiences include a Thali Dinner at Down to Earth, showmanship at the sizzling So Bespoke teppanyaki table, and a gastronomic journey of discovery through the resort’s organic gardens at Shades of Green.

Glass artists Cheyenne Malcolm and Ben Sharp will be in residence at Soneva Art & Glass, the Maldives’ only hot glass studio, until 26th August. As well as witnessing the artists’ incredible creations, which will be showcased in the gallery, guests will also be able to try glassblowing for themselves. In the realm of wellness, Tathata Kobayashi, a renowned Tai Chi Chuan teacher, will be sharing his extensive knowledge from 20th August until 10th September. Son of Tai Chi pioneers, Petra and Toyo Kobayashi, he has practiced across Europe for more than two decades.

Those who want to reconnect with the natural world can join a Conscious Experience – which offers an insight into Soneva’s sustainable philosophy. They include a Slow Life Journey around the resort’s organic gardens and Eco Centro waste-to-wealth centre, and sustainable hook-and-line fishing with a family of local fishermen. Guests can also swim with majestic Manta Rays in the nearby Hanifaru Bay – home to one of the world’s largest manta populations that form huge feeding chains and barrel-roll through the water, it is a once-in-a-lifetime encounter.

Young Sonevians will be entertained for every moment of the holidays, with fun, enriching summer camps for children and teens, and mentoring and complimentary activities from Oppidan Education. Younger guests can take part in treasure hunts, get active in a mini-Olympics, learn how to identify turtles, sail to the sandbank and so much more. Teens, meanwhile, are invited to learn about conservation and the environment, take a trip to a local island, discover how to cook tasty Maldivian snacks, and end their stay with a disco at The Den.

The new Soneva Academy enables older children to learn during their summer stay. The modular courses take children and teens aged 12+ from ‘junior’ to ‘expert’, and cover a range of fascinating topics, including the Night Skies, Zero Waste and Plastic Pollution, Marine Life of the Maldives, Mosquitoes and Disease, and the Adventure of the Corbin, a quest across the seas in the wake of an ancient galleon.

Michelin-starred chef Stéphanie Le Quellec will also be hosting dinners at Soneva Jani’s So Engaging chef’s table between the 1st and 15th July. With places for just five guests, this intimate venue offers a front-row seat to the action in the open kitchen. Later in the month, Heiko Nieder will be at Soneva Jani from 21st to 30th July – considered one of Switzerland’s finest chefs, he is known for his precision and intricate flavour combinations. Paco Morales, who honed his skills at the legendary El Bulli and Mugaritz before opening the 2-Michelin-starred Noor in Cordoba, will be at Soneva Jani from 12th to 23rd August. Guests can also experience the personalised Guess Who’s Cooking dining concept – prepared by a mystery chef and served in a secret location, the menu is tailored to their exact tastes. The Director’s Cut by Chef Nikki serves Japanese contemporary cuisine while guests watch a classic film at the open-air Cinema Paradiso. And at So Starstruck, the Maldives’ only overwater telescope, diners can explore the heavens with the resident astronomer.

Throughout August, each day at Soneva Jani begins with complimentary yoga or meditation on the beach or a revitalising session at the island jungle gym. There are also massage workshops and a range of summer spa therapies, including a pampering Mother and Daughter Spa Package, which includes a 50-minute massage. Those looking for an ocean adventure can join a knee-boarding lesson, try an e-surfboard or learn to soar over the waves on a flyboard. Or they can take a sunset cruise with a glass of Champagne to watch dolphins frolicking in the water.

The renowned UK mentoring firm, Oppidan Education, will be helping young guests at Soneva Jani continue their education outside of the classroom. Its experienced mentors inspire children to take ownership of their learning, helping them succeed both in academia and in life. Oppidan will be hosting one-to-one tutoring and mentoring sessions, as well as running a fun programme of complimentary activities at The Den.

Older children and teens aged 12+ can also join the new Soneva Academy to learn during their stay. These expert-led, modular courses invite children to dive into an underwater world with Marine Life of the Maldives, explore the constellations with the resident astronomer through The Night Sky in the Maldives, and embark on a three-night ocean quest that follows in the footsteps of ancient sailors on The Adventure of the Corbin.

With its pristine island location, many of the unique, family-friendly experiences at Soneva Jani focus on ocean conservation. Guests are invited to help the marine team as they nurture new corals on North Beach, and can also attend a thought-provoking lecture at the Marine Biology Centre. They can also join the resident marine biologist for a guided snorkelling tour of the thriving house reef or the underwater ecosystems around the Noonu Atoll.