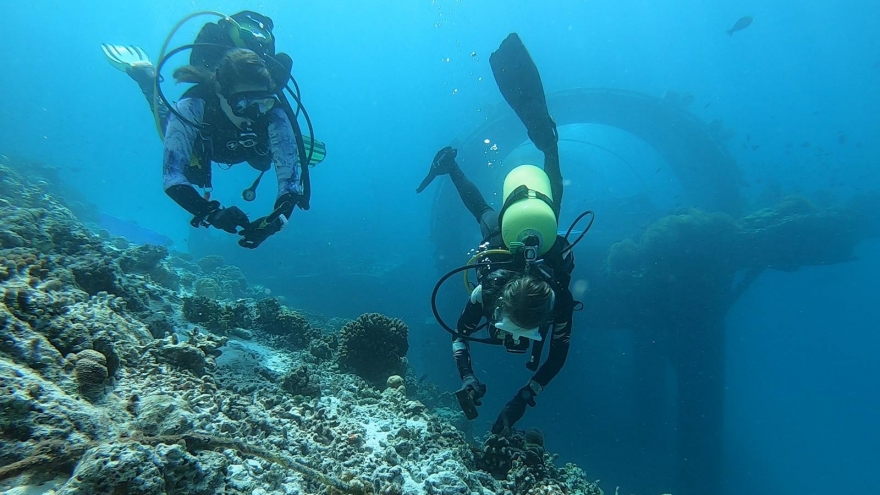 The coral reefs of the Maldives are a national treasure, these ecosystems are home to a huge diversity and abundance of marine life and they leave snorkellers and scuba divers in awe of their beauty.

Blessed with incredible reefs, Hurawalhi Maldives is a well-sought-after place for various underwater activities such as snorkeling and diving excursions, providing the chance to swim with the Maldives' most famous underwater inhabitants such as sharks, rays and turtles within easy reach.

This project was set up in 2019 with coral fragments collected around 5.8 Undersea Restaurant. The fragments initially had an average size of 4.3cm and after 18 months, had reached an average size of 11.2cm. Corals on the lines displayed a survival rate of 80%, despite them not being cleaned or maintained during much of 2020 due to the Coronavirus pandemic. Recently, the resort team has moved to the next exciting stage in the project – planting the corals! After careful assessment of the reef, 4 of the 7 coral lines were transplanted around 5.8; the coral lines were divided into several pieces and carefully placed in secure locations on the platform around 5.8, which was first cleaned of macroalgae. The health and self-attachment rate of the corals are now being monitored to determine where the remaining 3 coral lines will be placed. The coral frame with the remaining 3 lines was also moved next to 5.8 and guests can see it from the second window when walking down to the restaurant.

December 2020 saw the beginnings of a new coral nursery project in the form of a coral tree. A PVC pipe was used to construct a tree-like structure, anchored at the bottom and held upright with a floatation device. The ‘tree’ holds 100 coral fragments. The marine biologists collected broken off coral fragments from the reef surrounding Hurawalhi (these fragments are also known as ‘Corals of Opportunity’). The fragments, of an average size of 3.5cm, were tied to fishing line and attached to the arms of the tree. While the majority of the corals on the coral line project were bushy Pocillopora spp. This new project focuses on more finely branching species such as Acropora spp. as it was these that suffered the most damage during the last bleaching event in 2015/2016. It is important to have a great variety of different growth forms to add to the structural complexity of the reef and, with Acropora being a fast-growing species of coral, the island team are hoping to transplant the fragments to the reef in time for Christmas 2021.