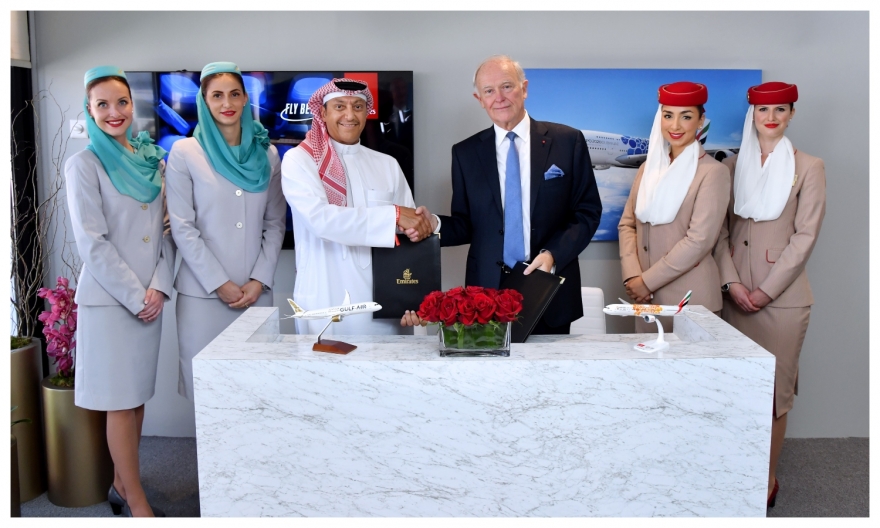 Emirates and Gulf Air have signed a Memorandum of Understanding (MoU) to develop a deeper commercial cooperation between both carriers.

The MoU will set the framework between both carriers to establish a potential codeshare cooperation across the networks of each airline, extending reciprocal loyalty benefits on Emirates’ Skywards and Gulf Air’s Falconflyer, and discussions are also underway to initiate cargo cooperation.

Signed on the first day of the Dubai Airshow, the MoU will mark the beginning of closer ties between the two airlines. The MoU was signed by Sir Tim Clark, President Emirates Airline and Gulf Air’s Acting Chief Executive Officer Captain Waleed AlAlawi. The signing ceremony was also attended members of each airline’s executive management teams.

Sir Tim Clark, President Emirates Airline said: “We are pleased to partner with Gulf Air on developing this codeshare agreement, which will give customers significantly enhanced choices, convenient schedules and flexibility to connect between Dubai and Bahrain, and beyond to cities in our extensive long-haul network. We believe that our new partnership will bring real benefits to our customers and business, and today’s agreement is a positive step in our cooperation, and we are on the way to further strengthening our relationship in the future.”

During the event, Gulf Air’s Acting Chief Executive Officer said: “This will be a remarkable partnership between one of the first airlines in the Gulf region and one of the biggest carriers in the world. We’re proud to explore opportunities with Emirates to expand our reach and at the same time extend our boutique services to Emirates’ passengers when flying on our network. Gulf Air and Emirates operate multiple flights between Bahrain and Dubai and this agreement will provide passengers with more choices beyond our hubs."

Once the codeshare is activated, customers will be able to book their travel with both airlines on emirates.com and gulfair.com, through online travel agencies as well as with local travel agents.