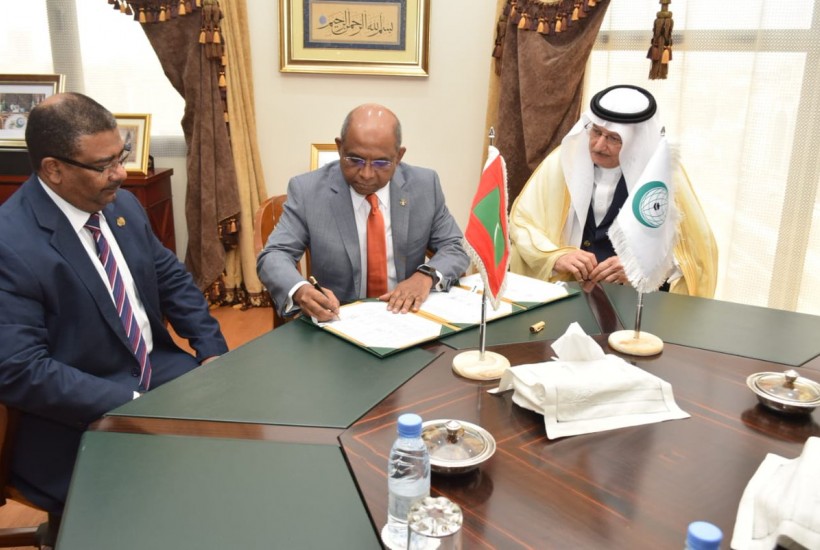 Minister of Foreign Affairs Abdulla Shahid called on the Secretary-General of the Organization of Islamic Cooperation (OIC) Dr. Yousef bin Ahmed Al-Othaimeen, at the OIC General Secretariat in Jeddah, Kingdom of Saudi Arabia. Foreign Minister Shahid arrived in Jeddah on 25th November to attend the Opening Ceremony of the Commemoration of the OICs Golden Jubilee held later in the evening of the same day.

During the meeting, Foreign Minister Shahid and the OIC Secretary-General discussed ways in which the Maldives can further contribute to the deliberations within the OIC, and the Secretary-General welcomed the decision by the Government of Maldives to open a consulate in the city of Jeddah, which is also where the OIC General Secretariat is located.

Foreign Minister Shahid also signed the Statute of the OIC Womens Development Organization, a new body established under the auspices of the OIC to promote the role and empowerment of women within Member States. Aspiring to the principles and objectives of this organization, the Maldives Peoples Majlis gave consent to the Maldives application for membership in September 2019.

The OIC remains one of the principles international organizations which the Maldives actively participates in. In March 2019, Foreign Minister Shahid attended the 46th Council of Foreign Ministers Meeting in Abu Dhabi, and in May 2019 President Ibrahim Mohamed Solih attended the 14th Islamic Summit which was held in the Holy City of Makkah.

The Organization of Islamic Cooperation is the second largest inter-governmental organization after the United Nations with a membership of 57 states, and is the collective voice of the Muslim World. Its main objective is to safeguard and protect the interests of the Muslim World, and strives to promote peace, tolerance and harmony amongst the various peoples of the world. The Maldives became a Member State of the OIC in 1976 during the presidency of Ibrahim Nasir Rannabandeyri Kilegefan NGIV.