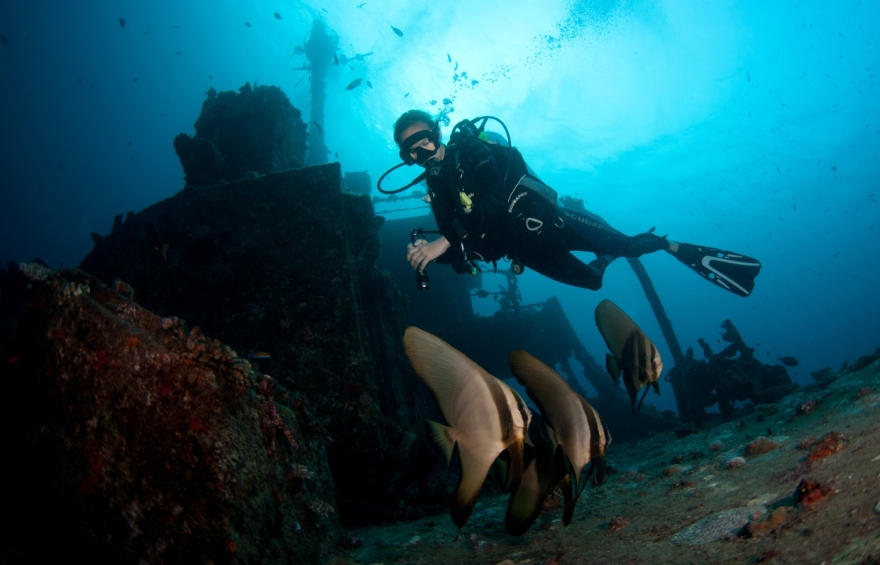 Parrotfish swim past shoals of Moorish Idols. Moray eels slide through the lagoon. Groupers make goliath appearances amidst the rainbow of butterflyfish and damselfish, while the resident Hawksbill turtle glides in for a visit; the underwater world beneath the Maldives azure waters is absolutely teeming with life. At times, you’ll be questioning reality when you have stumbled onto a scene straight out of Finding Nemo.

For a country made up of 99% ocean, the seas have always been the lifeblood for its people, an integral part of their existence, but the rising tourist numbers have also contributed to a scuba diving boom. Then again, it’s not just the visitors who have pulled on a wetsuit, thrust a regulator into their mouths, and ventured to the Maldivian waters. According to underwater explorer and former dive instructor of Maldives National Defense Force (MNDF), Mohamed Shafraz Naeem, locals have become regulars on the diving scene as well. “I’ve been diving since 1994, and right now there’s a lot more opportunity than there used to be,” he said. “There’s so many talented local divers now, and there’s also the presence of Maldivians in several dive expo’s that are held abroad. The rise of social media has helped promote diving in the country as well. However, despite the calls for climate change, there’s so little that has been addressed and we have a long way to go. I hope the Government of Maldives view this more seriously.” Many a ship have met a watery grave and lay scattered deep in the Maldivian waters, meaning some exploration-worthy wrecks lie on the ocean floor of this tropical diving paradise. Here’s a roundup of our favorite wrecks for an exciting underwater adventure:

Located 33-meters beneath the turquoise blue waters of Addu, lies the wreckage of the 5.5 ton oil tanker, the British Loyalty. It was torpedoed twice during World War II, and today it rests on her starboard side, with the port side at 16m. Dense hard and soft corals now grow all over the ship, including on the propeller which sits at 28m. Divers can also swim through the large hole made by the torpedo to explore the ship’s interior. The site harkens back to an incredibly interesting point in Maldivian history and is a must for those interested in the British presence in the country.

To the west of Dhigufinolhu island lies a small, submerged patch of coral known locally as a giri, (kuda translates small in Dhivehi). On its south-west side, lies a wreck of a steel fishing trawler, which has been lying on the sandy bottom at 35m for more than a decade. The vessel lies upright with its bow pointing towards the reef at about 18m. The deck slopes down towards the stern, which is at about 30m. Both soft and hard corals adorn the outside of the vessel, and divers can find a resident school of batfish, glassfish, wrasses and jackfish. There’s also the chance to spot frog and leaf fish, as well as on the reef itself, which is extremely pretty and well worth exploring after the wreck.

The stern of the upright ship lies 29 meters at the bottom of the ocean. The wrecks have inundated in a remarkably short period in soft and hard coral - consequences from strong currents streaming through the channel. In the wrecks are many morays, which glance inquisitively at divers from the protection of their metallic refuge, and in every recess are huge schools of yellow sweeper that glisten blindingly in torchlight. The wrecks have become home to a multitude of fish, including boxfish, pufferfish, porcupinefish, Napoleon, emperor, angelfish, surgeon, and red bass. A school of tallfin batfish allows divers to come close and lying on the bottom of the wreckage it is often possible to see a nurse shark. In the channel, pelagics and grey reef sharks are regularly sighted.

This steel, Japanese cargo vessel, sometimes also simply known as Machchafushi Wreck, was sunk in 1998. Since then the vessel has been inundated with life – both soft and hard corals compete with sponges, algae and sea squirts for space on this 30m ship, making this a fantastic spot for observing and photographing macro life. In addition to a profusion of critters, divers can find large lionfish, boxfish and pufferfish around the vessel. Diving enthusiasts wishing to explore the interior can easily do so from access points on either side of the hull.

In 1879, the SS Sea Gull, a 1012 tonne steamship, was travelling from London to Calcutta when she ran aground outside Gaafaru. Today, the anchor sits on the reef at one metre and can be spotted at low tide. The rest of the ship split in two and other pieces are scattered across the reef, such as the two-cylinder engine. Due to the length of time in the water, the wreckage parts are almost entirely covered in coral, which at times makes it easy to miss. There is also a cave at 30m, where it’s possible to spot nurse sharks. Elsewhere, divers can often see barracudas, jacks, eels and stingrays.

The Corbin, a French ship which ran aground on the reef of Goidhoo Island in 1602, is best known in the Maldives for being the vessel that brought French sailor and memoirist François Pyrard de Laval to the country. A survivor of the wreck, Pyrard was held in captivity in the Maldives for five years, only managing to leave when a band of marauders from India helped him escape. He then went on to publish an account of his time in the country and the journal provides one of the richest historical insights into the Maldives’ past. Although nothing remains of the vessel, the site still prompts intrigue, especially amongst those who know that the vessel’s cargo of many thousands of silver coins is still scattered across the ocean floor, waiting to be retrieved.

Before she ran aground on the north west side of Gaafaru on April 16th 1974, the Lady Christine had been conducting survey work and laying communications cables. When stormy weather meant that a tugboat was unable to pull her from the reef local workers were frantically called upon to rescue all valuables from the ship as she began filling with water. The ship owners eventually resorted to blasting holes in the reef to create a channel as a last-ditch attempt to save the ship, but all efforts proved ineffectual. When all salvage attempts were wrapped up, the vessel was abandoned. The ship now sits about 300m west of Hulhangu Kandu, with the bow visible above the surface. Most of the wreck lies scattered on the reef above ten metres and an incredible variety of marine life can be found in the vicinity – fish, eels, rays, sharks and turtles. There are also some beautiful caves at 30m, which many divers explore first, before making their way to the wreck for the remainder of the dive.