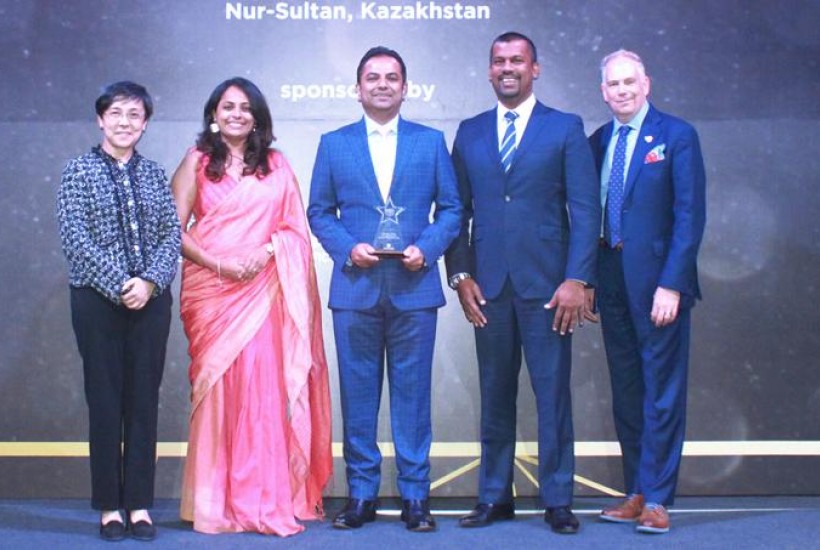 SriLankan Airlines, the National Carrier of Sri Lanka and a member of the oneworld alliance, continuing to prove the global appeal of its marketing communication endeavors, won an esteemed PATA Gold Award in Astana, Kazakhstan recently.

Accordingly, the award winning entry Two Cities, One Spirit which was aimed at enticing travelers to experience the inherent similarities between Sri Lanka and Melbourne, managed to bag a Gold Award in the category Marketing Carrier.

PATA Awards recognizes impactful campaigns, institutions and initiatives that inspire travel and tourism in the region.  This years awards attracted 197 entries from 78 organizations and individuals worldwide. The winners were selected by an independent panel of judges.

SriLankan Airlines Chief Executive Officer Mr. Vipula Gunatilleka said, "We are delighted to receive yet another global accolade for this marketing campaign which announced the launch of our Melbourne services. This reaffirms the universal appeal of our communication endeavors. As the National Carrier of Sri Lanka, we are honored to put Sri Lanka on the map."

"Two Cities, One spirit" stems from a place of honoring and celebrating the kinship between Melbourne and Sri Lanka. This was aimed to appeal to the Sri Lankan Diaspora in Melbourne and the Australians who are attracted to adventure on the island. The creative executions were inspired by idiosyncrasies that exist in both Sri Lankan and Australian cultures, expressed through visuals that celebrate the similar vivacity and passion deeply rooted in food, art, adventure, surfing and the iconic wildlife that are inherent to both destinations.

The use of location pin as a stylistic element widely recognized by the contemporary traveler was aimed to emphasize on the non-stop connectivity (the point-to-point quality) and that the connections can be extended to an onward destination across the Airlines network. This was used when promoting key feeder markets to Melbourne via Colombo, such as Middle East and India.

Accepting the award on behalf of the Airline, Senior Manager Marketing Mr. Saminda Perera said, "We are extremely glad to return to this esteemed forum after a break of 12 years. For us at Marketing, winning a global accolade is not just a reason for celebration but also an inspiration to continue this award-winning streak."

Since the inception of operations in 2017 which was marked by the launch of this campaign, the Airlines direct daily services between Colombo and Melbourne are well received by passengers, and has been a commercial success.  SriLankan Airlines passengers travelling between Colombo and Melbourne have the opportunity of enjoying the state-of-the-art comforts of the Airlines Airbus A330-300 fleet, with modern onboard comforts including   flatbeds in Business Class, sophisticated inflight entertainment, WIFI and GSM connectivity and the award-winning service provided by SriLankans award winning cabin

Drawing inspiration from the success, the Airline plans to re-launch the campaign, thereby unveiling more facets of fascinating parallels of the two cities for the inspiration of travellers.

Some of the other award winners were Hong Kong Tourism Board, Ministry of Tourism, Government of India; Sarawak Tourism, Malaysia; Taiwan Tourism Bureau, Chinese Taipei; Tourism Authority of Thailand, and YANNA Ventures, Thailand.