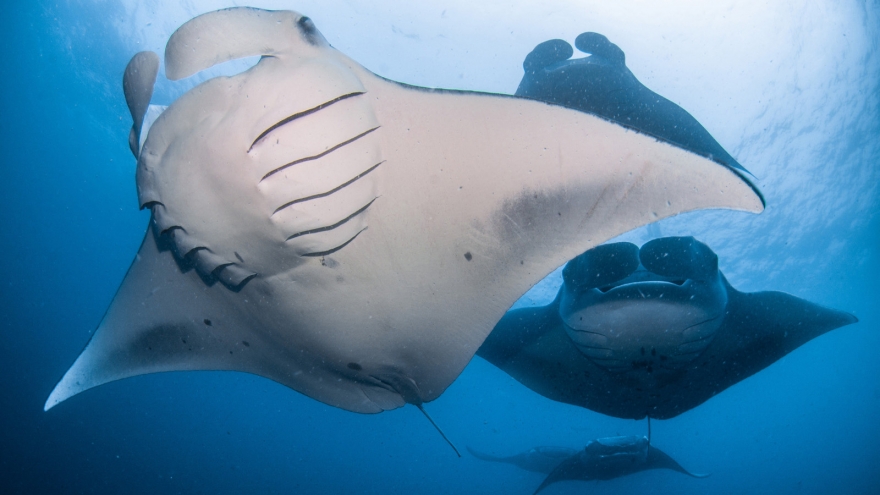 As 2021’s manta season approaches, guests at Landaa will once again be in prime position to swim with and study the world’s largest recorded population of mantas alongside the experts responsible for identifying them.

Since 2005, the Maldives reef manta ray population in Baa Atoll has been continuously studied by the Maldivian Manta Ray Project (MMRP) – The Manta Trust’s founding project, based at Four Seasons Resort Maldives at Landaa Giraavaru.

“We know that the more people are aware of manta rays and their environment the more they’re going to want to protect them. Swimming with manta rays is an incredible experience because they’re so intelligent and curious – once you’ve met a manta ray, there’s no way you couldn’t care about them. Yet it’s also essential to develop our understanding of their behaviour in the absence of humans, which is why our research involves both observed and remote underwater video surveys,” said Beth Faulkner of the Maldivian Manta Ray Project.

The MMRP recorded an estimated 4,625 sightings of reef manta rays between August 15 and November 30, 2020. Despite a three-month delay to the season’s operations as a result of the COVID-19 pandemic, 2020 sightings were four percent higher than 2019, and the third highest since records began. November 2020 also brought a major milestone: the identification of the 5000th unique reef manta in the Maldives.

Drawing on well over a decade of research and analysis, the MMRP team has also released its annual "hot dates" for 2021: periods between June and November when mantas are most likely to be seen in large numbers in the waters close to Landaa Giraavaru.

With wingspans up to 7 metre (23 feet), speeds of up to 24 kilometres (15 miles) per hour, and cognitive function on a par with dolphins, manta rays are some of the most impressive creatures in the ocean. Classed as “vulnerable” on the Red List of the International Union for Conservation of Nature (IUCN), Beth and The Manta Trust team know that by connecting people to mantas, the mantas’ chances of survival will increase.

In addition to the importance of scientific research, the theme of conservation through connection underpinned the team’s recent appearance on CNN. As part of the inspiring Call to Earth series, Beth outlined how The Manta Trust’s “ultimate purpose is to get manta rays protected worldwide and also to protect the habitat they need to survive.”

Guests at Landaa Giraavaru are able to take advantage of the Resort’s Manta-on-Call service, which works with the research boat to notify guests when mantas are sighted, whisking them away by speedboat for a snorkelling experience like no other.

2021 Manta Hot Dates, as identified by MMRP include: