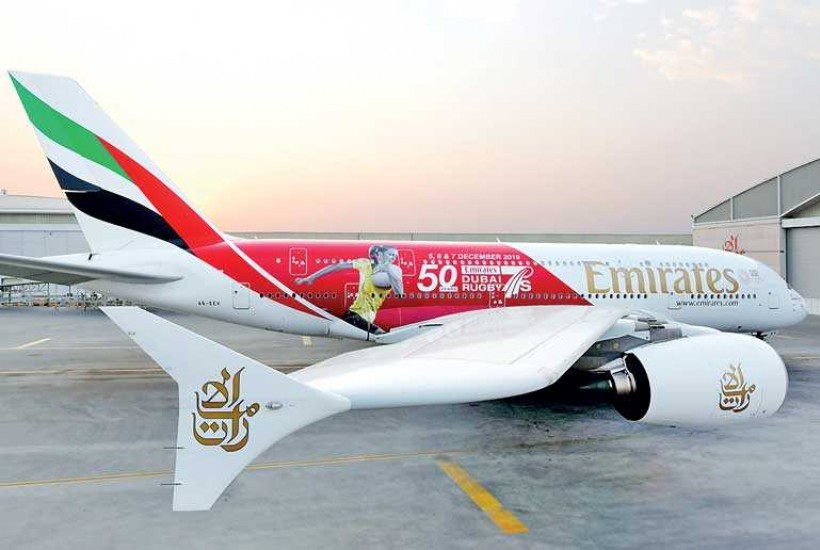 A brand-new livery was designed and dedicated to the 50th staging of Dubais flagship sporting event, one of the key tournaments on the HSBC World Rugby Sevens series, revealed the title sponsor of the Emirates Airline Dubai Rugby Sevens, Emirates.

Recently designed livery consists of a red backdrop with an extensive version of male and female rugby players fiercely in action.

Rugby Sevens-themed A380 livery, managed by the Emirates Airline Dubai is scheduled to visit the most supportive nations of Rugby throughout the next few months. The flight had already reached their first destination, Glasgow on 20th July. "This livery is one of the many ways we are celebrating the milestone 50th anniversary of the Emirates Airline Rugby Sevens. For the rest of the year it will fly across the world, inspiring both new and die-hard rugby fans everywhere to share in the excitement. With three days of exhilarating rugby action, fantastic family activities and incredible entertainment from pop icon Kylie Minogue, its going to be the perfect celebration of Dubais favorite sporting event." Said, Gary Chapman, President of Emirates Group Services & dnata.

Emirates Airline Dubai Rugby Sevens is also known to host an International Invitation Tournament that is gaining immense popularity and growth, presenting Rugby and Netball teams from all generations across the globe, summing up to a number of 300 teams.

Participation of over 100,000 fans and onlookers are presumed during the three days of the event.

An International Popstar, Kylie Minogue will be headlining a concert on Friday the 6th of December, gracing the 50th edition of Dubais largest sporting and social event with great excitement.

The game of Rugby had been closely linked with the Airline since the year 1987, becoming the Dubai Rugby Sevens events Official Sponsor in the same year.

At present, Emirates sponsor the World Rugby Referees and Match Officials, besides their partnership with the UAE Rugby Association. The official worldwide partner and the official airline of the Rugby World Cup presented in Japan will be marked as a highlight on the calendar of Rugby this year.