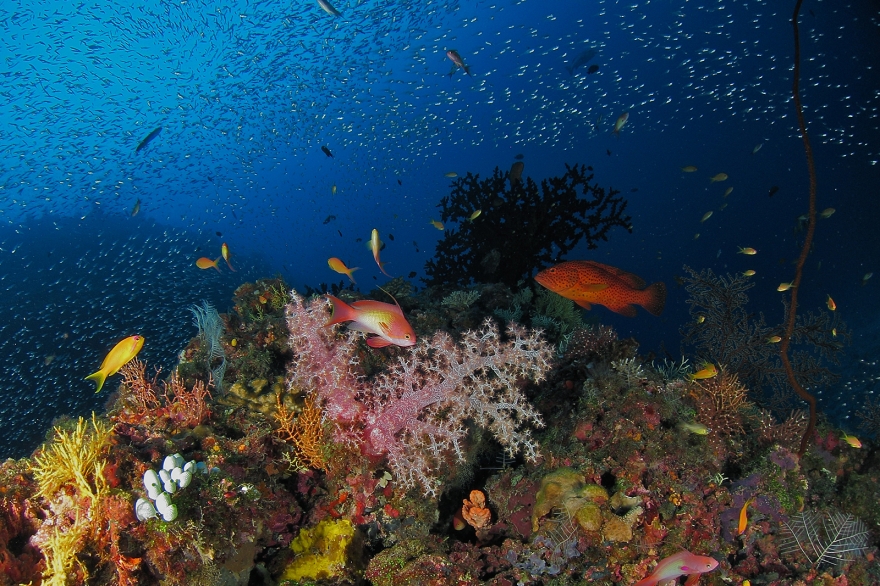 Soneva has launched an ambitious programme to restore coral reef systems and create a coral hub for the Maldives. A partnership between the Soneva Foundation, the Swiss environmental organisation Coralive and the global ecosystem restoration organisation Ark2030, the project aims to protect and regenerate this vital marine habitat, which has been decimated by rising sea temperatures, ocean acidification, El Niño events and ocean pollution.

The coral restoration programme, located onsite at Soneva Fushi in the Baa Atoll, is the largest conservation initiative to be supported by the Soneva Foundation. Founded in 2010 by Sonu and Eva Shivdasani, this UK-registered charity builds on their belief that a business must have a purpose beyond profit and invests in the development of global projects that have a positive environmental, social and economic impact.

“With the global warming crisis, the Maldives has little influence over the actions of the big greenhouse gas emitting countries. We can’t bet our future on a wish and a prayer that the big countries decarbonise their economies in time to halt climate change before it wipes out our coral reefs. We need a back-up plan. When finished, the coral farm at Soneva Fushi will be 1 hectare in size – one of the largest coral farms in the world – and in the ensuing years it is our goal to cultivate 1 hectare of coral each year at each of our resorts. This is the scale that is needed to have a meaningful impact and it also represents a huge opportunity for the Maldives to become a global leader in an activity that will likely have considerable future demand,” said Sonu Shivdasani, CEO and Co-Founder of Soneva.

Coral reefs are among the most biodiverse ecosystems on the planet, providing habitat for a quarter of all marine life, as well as protecting coastal communities from storms and erosion, with an estimated half a billion people worldwide reliant on reef systems for their livelihoods. Over the last three decades, more than half of the earth’s corals have died, with scientists predicting that up to 90 percent of all reefs will be lost over the next 20 years if decisive action is not taken.

The large-scale, in-situ restoration programme at Soneva Fushi aims to restore coral habitats and improve the resilience of the marine ecosystem around the Baa Atoll resort, with the long-term goal of becoming a coral restoration and knowledge hub for the Maldives and beyond. Following a two-year study to define the most suitable restoration techniques for the Maldives’ unique marine environment, it will become the largest Mineral Accretion Technology (MAT) coral nursery in the world. Once fully operational, the nursery will cover one hectare of ocean and propagate 50,000 coral fragments every year. The ultimate aim of the programme is to regenerate the reef back to the state in which it existed 25 years ago, covering out-planted corals across 40 hectares over the next decade.

Channelling low voltage electricity through metal structures placed underwater, MAT creates the ideal environment for corals to grow – as the electrons flow, calcium carbonate (CaCO3) deposits begin to accumulate on the structures, the same mineral that forms the skeleton of most hard and some soft coral species. Corals that have been placed on MAT structures have been observed to grow up to four times faster than other propagation methods, as well as having significantly higher survival rates during bleaching events. At Soneva Fushi, the nursery will be cultivated from ‘corals of opportunity’ – rather than being harvested, these are corals that have been broken or damaged due to storms, waves or human activity.

Located at the outer edge of the house reef, the coral nursery at Soneva Fushi will comprise 432 table structures, arranged in three circular clusters. The project is divided into three distinct phases: the initial installation phase, where the tables and nursery infrastructure will be placed into the water, expected to take up to three months; a two- to three-month population phase, which will include scouting for donors and creating a detailed database to record taxonomy, growth and survival rates; and the third, ongoing maintenance and monitoring phase to ensure the health of the corals, monitor predation and verify that the MAT equipment is fully functional. Each table structure will be given its own unique code, where coral growth rates and health are recorded twice a year.

The restoration site at Soneva Fushi will be constantly monitored via an Aqualink Smart Buoy, which records temperatures at both the surface and the ocean floor, with all data accessible through the cloud. In phases two and three of the project, guests at Soneva Fushi will be invited to join in the restoration efforts themselves – a unique opportunity to be part of this ground-breaking project.