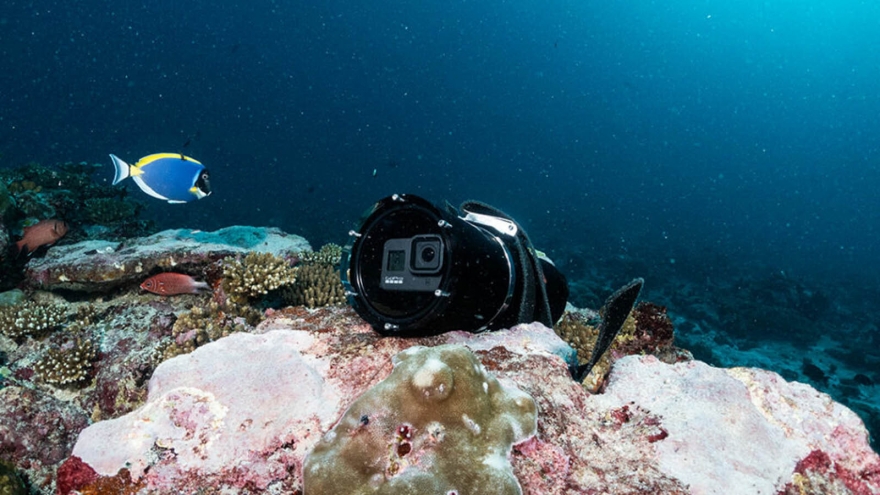 Hurawalhi’s marine biologists, Lois and Kat, are embarking upon some very exciting research leading from the incredible numbers of sharks seen nearby the island.

With an abundance of shark species in the atoll, Lhaviyani Atoll is a hotspot for ocean lovers to experience and meet various sea animals such as Mantas during Manta season and more ethereal creatures. Hurawalhi guests frequent a nearby dive site called KFFK or Kahlifushifaru, where sharks are guaranteed to spot.

According to the Marine Biologists, after surveys conducted at KFFK over the past 12 months, they have recorded 7,371 grey reef shark sightings during 174 dives alone, which equates to an average of 42 per dive. They also sighted 408 silvertip sharks and 2,914 spotted eagle rays. This is a massive number of sharks to be seen at one dive site and this is a positive sign for a healthy reef, said the team.

The shark study will be conducted at the KFFK site using the ‘Eyes On The Reef’ (EOTR) systems, also used by the Manta Trust team to record data on Mantas. These systems are essentially underwater time-lapse cameras, which provide new insight into manta behavior and habitat use. This information provides vital scientific guidance to Maldivian communities, businesses and the government; ultimately helping them to protect the local manta population on which their economy depends.

The shots taken via the technology will provide the Hurawalhi team with needed information regarding which species are sighted there, how many individuals, at what times of day and during which months are they most sighted in. The camera systems can be left down for 7 days at a time (thousands of photos collected), making it ideal for this type of data collection, in contrast to dive surveys which consists of a limited time.

Additionally, they have plans to study juvenile blacktip reef sharks’ behavior, using the waters as a nursery area, before moving out onto the deeper reefs. This data will be collected using drones flying over the area, without disturbing the species. Overall, Hurawalhi hopes to pinpoint “key areas around the resort that are especially important for their growth and development, so we can focus our efforts into protecting these areas.”