Emirates A380 touches down in Cairo 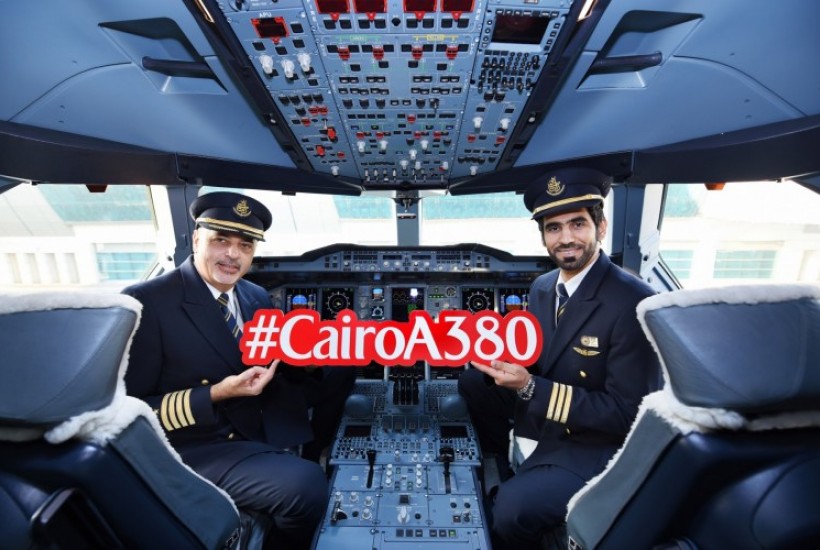 Emirates award-winning A380 made its debut at Cairo International Airport (CAI) on 2nd October as the airline brought its popular aircraft to Egypt for the first time. The landing demonstrated the airports readiness to accommodate the A380, the worlds largest commercial passenger jet.

The flight was welcomed by key officials including General Ahmed Maher Geneina - Chairman of Egyptian Holding Company for Airports and Air Navigation, and Ahmed Fawzy, Chairman of Cairo Airport Authority.

Travelling on the flight from Dubai was Adel Al Redha, Emirates Chief Operating Officer, as well as prominent members from the UAE business community.

Adel Al Redha said, "This day has been in the making for some time, and the Emirates A380s grand debut in Cairo is the culmination of a lot of planning and hard work. We mark a new chapter in our long-relationship with Egypt by bringing our flagship aircraft to the country. We hope to play a part in Egypts success by supporting trade and tourism, and bringing the country closer to the world. We would like to thank the Egyptian government, the Ministry of Transport and the government authorities who have been invaluable in making Emirates first A380 service a tremendous success. We look forward to operating the A380 on a scheduled basis to and from Cairo."

The Emirates A380 operating to Cairo is set in a three-class configuration, and will have 426 seats in Economy Class on the lower deck, 76 flat-bed Business Class seats and 14 luxurious First Class Suites. First Class passengers can relax and revitalise in one of the two A380 Shower Spas, and First and Business Class passengers are welcome in the Onboard Lounge to enjoy an extensive range of beverages and delicacies.

Passengers in all classes can enjoy complimentary meals and beverages, Wi-Fi, hospitality and service from multi-national cabin crew and Emirates' award winning 'ice' with up to 4,500 channels of movies, TV programs, music and podcasts. Premium customers, and Platinum and Gold Skywards members can additionally enjoy the dedicated Emirates Lounge in Cairo airport which opened in 2018. Popular destinations on the Emirates network for Egyptian travellers include cities in the Asia, the Americas and Australia such as Beijing, Bangkok, Hong Kong, Sydney, Shanghai, New Delhi, Mumbai, New York and Washington DC.

Emirates started operations to Cairo in April 1986 with three flights a week and since then, has carried more than 7.3 million passengers to and from Cairo. Operations have steadily grown with increases in both frequency and capacity between Cairo and Dubai to match customer demand. Today, Emirates operates 21 weekly flights between Cairo and Dubai. Earlier this year, Emirates announced it will increase the frequency of flights between Dubai and Cairo, adding four additional flights a week to its existing thrice-daily service, starting 28 October 2019, taking the total number of weekly Emirates flights serving Cairo to 25. Globally, the airline employs more than 2,000 Egyptian nationals in a variety of roles across the Emirates Group, including over 1,000 cabin crew.

The Emirates A380 has become one of the most recognised and admired aircraft in the world, and more than 115 million passengers have experienced the airline's flagship since 2008. Emirates currently has 112 A380s in service and 11 pending delivery, and is set to receive 6 A380s this financial year.