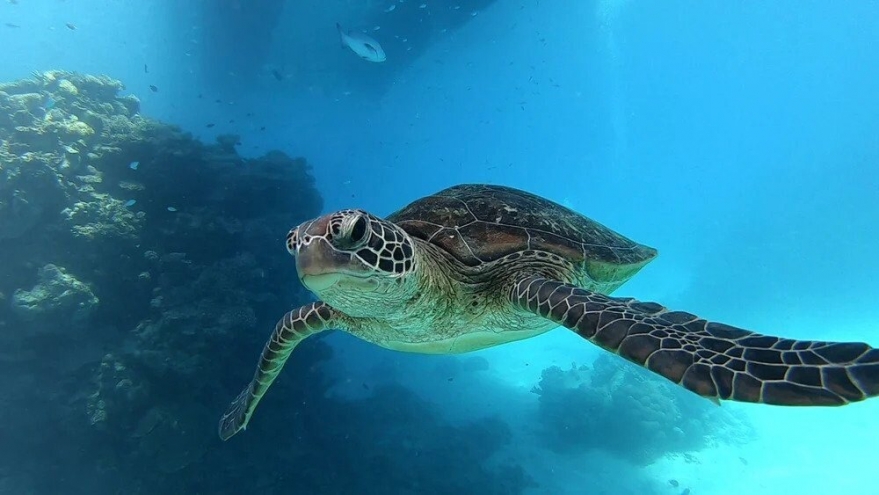 Amilla Maldives Resort and Residences has joined forces with the turtle conservation organisation, the Olive Ridley Project, to monitor and conserve local turtles. There are nine individual turtles that visit Amilla to feed regularly, and three that nest on the island, according to the resort’s latest research. Nests belonging to Green Turtles are the most common type of turtle nests found in the Maldives. However, at Amilla Maldives Resort, both Green Turtles and less common Hawksbill Turtles nests have been located. Guests snorkelling on the extensive house reef can often see large turtles grazing or slowly swimming by, but the nests are carefully protected.

Amilla’s Marine Biologist, Zoe Cox, (who has been working alongside the Olive Ridley Project ever since it started operating in the Maldives in 2017), has been busy submitting to them ‘turtle IDs’ and nesting data from Amilla. She creates ‘turtle IDs’ by taking a picture of each side of a turtle’s face when she spots them on Amilla’s house reef or nesting on the island. The pattern on the side of a turtle’s face is unique to each individual. “It’s a great way to monitor populations, migrations, movement and turtle hotspots without physically tagging the turtles and harming them,” explains Zoe. “It’s not even necessary to be a marine biologist to use this simple ‘turtle ID’ method, you just need a camera.” Now with an Olive Ridley Marine Biologist resident on the naturally lush private island resort, even more work can be done.

Although the pristine waters around Amilla Resort, the Baa Atoll UNESCO World Biosphere Reserve, is a popular spot for turtles to feed, play and nest, the Olive Ridley Project did not have a marine biologist based there, which is why Amilla Resort decided to fill the gap by partnering with them. Now the five-star resort can support their research and help raise awareness of their cause amongst its guests.

Amilla is also attempting to raise awareness of turtle poaching in the area, and is aiming to educate people on why this is harmful to the environment as well as the economy. Turtles are important environmentally and economically for many reasons, but the myriad of benefits vary by species. “Some species of turtle, such as Green Turtles, graze on seagrass, which is vital for removing carbon from the atmosphere” explains Zoe. Grazed seagrass has higher metabolic carbon capture than ungrazed areas.

“Some species eat sponge and algae growing on the coral reef, which prevents them from out-competing the coral,” she continues. “And some turtles eat jellyfish, which helps keep their population in check. Their nesting also provides nutrients to the beaches in the form of eggshells and undeveloped eggs.”

Snorkelling is the most popular activity in the Maldives, according to tourist board data. Visitors come to the Maldives to marvel at the marine creatures like turtles, and admire the reefs which turtles help keep healthy. But healthy reefs also benefit local fishermen, too, because they provide a safe place for their future catches to grow and breed.

Earlier this year, Amilla Maldives celebrated World Turtle Day by offering guests the opportunity to sponsor Amilla’s local turtles, or choose names for them. They also ran a special turtle excursion, with all proceeds donated to the Olive Ridley Project. Any of the resort’s younger guests can learn more about turtles and other aquatic creatures living in the area with Amilla’s Mini Marine Biologist programme. To find out more about deals for families, couples and groups of friends, click here.