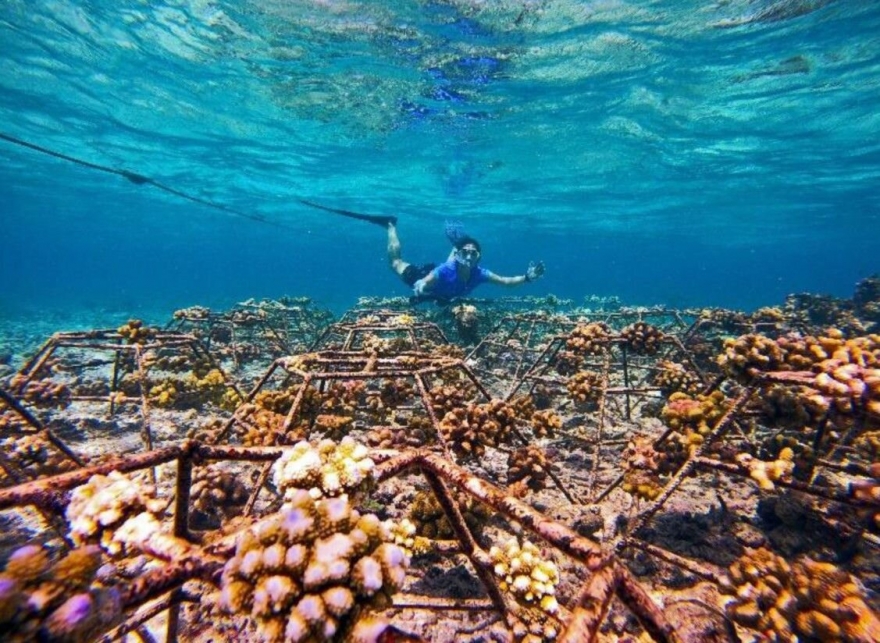 Coral reefs, the magical underwater colonies, are now dwindling world over because of global warming, ocean acidification, and pollution. In response to these threats, OBLU SELECT Sangeli initiated a reef conservation program in January 2019.

The first step was to build a coral nursery to help restore the lost coral cover. Located in the main lagoon, the nursery uses the coral line method - with 151 coral fragments twisted into seven five-meter-long ropes and propagated and grown. In addition, 60 metal frames with 2280 fragments were placed in 3 different locations around the island. These coral gardens include,

- 10 frames in the lagoon side of the water villas

The coral bleaching in 2016 had left the reefs around Sangeli island barren with coral rubble and sandy lagoon beds. Without the life-sustaining reefs, marine life also dwindled.

However, under the watchful eye of in-house Marine Biologist, Giorgia Maggioni, the coral nursery got a shot in the arm and thrived in the last three years. These sites are nurtured and regularly monitored to remove marine debris and replant broken corals. Colonies on the rope structure are growing well and many of them are being transplanted to the house reef using a specific cement meant for underwater purposes. The survival rate of these corals is very high.

Thanks to all the conservation efforts, the lagoon bed now has a lush coral cover, with many fish and other marine animals visiting and inhabiting the frames. Snorkellers can see a myriad of ocean life with parrotfish, snappers, eagle rays, sharks, and many other fish species and invertebrates.

Marine Talks, organized twice a week, provide an overview of the local flora and fauna with a focus on corals, turtles, sharks, and rays. In-villa television screens feature an engaging video that outlines safe snorkelling practices, entry points into the lagoon and tips on avoiding touching or accidentally stepping on sea creatures and corals.

Ghost nets are fishing nets that have been abandoned, lost, or discarded at sea, on beaches or in harbours. In the Maldives the use of nets is prohibited however, due to the oceanic currents, large ghost nets often wash up on the islands. This happened recently at Sangeli island. The colleagues at the resort removed four nets from the ocean and released the entangled animals back into the ocean.

The most colourful threads from the nets were cleaned and repurposed into 100% recycled plastic bracelets. These ghost net bracelets were then sold to guests and the proceeds were all used to fund the coral restoration project.

Hawksbill Turtles, one of the seven critically endangered species in the Maldives, are often found around the island of Sangeli. To protect these gentle creatures, the resort initiated a photo-identification initiative in collaboration with Marine Savers and Olive Ridley Project (ORP).

A new turtle was identified in the Sangeli house reef and named Akiri, in honour of the island’s local name of Akirifushi. Guests can also get trained on photo identification and look out for Hawksbill Turtles during dives, should they wish to. And, if there happens to be a new identification, they get to name the turtle!

Atmosphere Hotels & Resorts has a Standard Operating Procedure to identify, monitor, handle, and release sea turtle hatchlings into the wild. First prepared and implemented at OBLU SELECT Sangeli, this procedure ensures that turtle nests and hatchings found at the resorts are protected, thus increasing the likelihood of the hatchlings surviving once they reach the ocean.