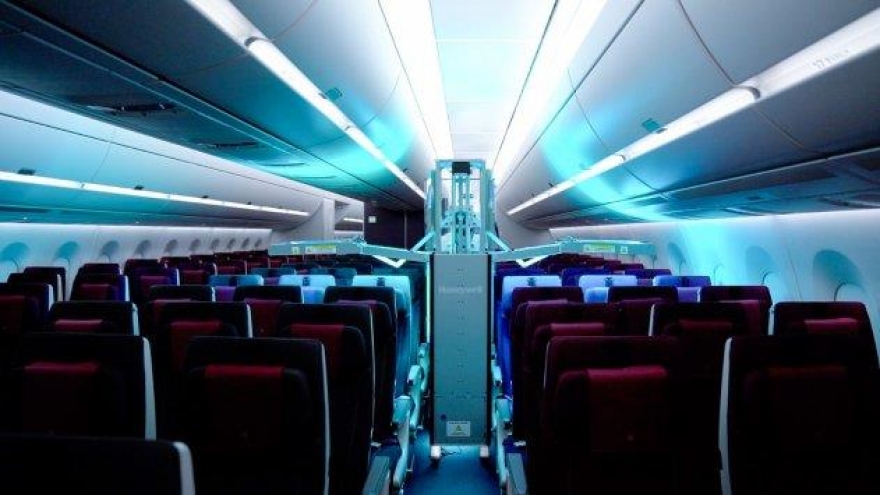 Qatar Airways becomes the first global carrier to operate Honeywell’s Ultraviolet (UV) Cabin System, further advancing its hygiene measures onboard. In clinical tests, UV light has been shown to be capable of inactivating various viruses and bacteria when properly applied.

Approximately the size of a beverage cart, the Honeywell UV Cabin System, which is operated by Qatar Aviation Services (QAS), has extendable UV arms that treat aircraft seats, surfaces and cabins without using cleaning chemicals.

Having already received six of the Honeywell UV Cabin System, the devices have undergone comprehensive testing onboard Qatar Airways aircraft, before entering service. The airline aims to acquire additional units in the near future, in order to operate them onboard all aircraft turnarounds at Hamad International Airport (HIA).

Qatar Airways Group Chief Executive, His Excellency Mr. Akbar Al Baker, said: “We are pleased to be the first global airline to operate the Honeywell UV Cabin System onboard our aircraft. In clinical tests, UV light has been shown to be capable of inactivating various viruses and bacteria when properly applied at specified doses.

“During these unprecedented times, the health and safety of our crew and passengers continues to be of the utmost importance. Since the start of the pandemic, we have been regularly introducing new and effective safety and hygiene measures onboard our aircraft, based on our unparalleled expertise of flying consistently throughout.”

Honeywell Aerospace President EMEAI, Mr. James Currier, said: “Honeywell has technology today that can make air travel safer – from the traveller to the airport worker, throughout the airport and onboard the aircraft. We’re working across business lines to develop new products such as Honeywell ThermoRebellion, a new temperature-monitoring solution - Environmental Control System Check, which allows airlines to monitor air flow in the cabin, and an array of Personal Protective Equipment. All this allows for cleaner and safer airports.”

Qatar Airways’ aircraft will continue to be regularly disinfected using cleaning products recommended by the International Air Transport Association (IATA) and the World Health Organization (WHO). The Honeywell UV Cabin System will be utilised as an additional step after manual disinfection, to ensure the very highest standards of cleanliness. The airline’s onboard linen and blankets will continue to be washed, dried and pressed at microbial lethal temperatures, while its headsets are rigorously sanitised after each flight. These items are then sealed into individual packaging by staff wearing hygienic disposable gloves.

Qatar Airways’ aircraft also feature the most advanced air filtration systems, equipped with industrial-size HEPA filters that remove 99.97% of viral and bacterial contaminants from re-circulated air, providing the most effective protection against infection.

In July, Qatar Airways further increased its health and safety measures onboard by introducing new personal protective equipment (PPE) for customers and cabin crew. The airline’s robust measures included offering face shields to all passengers, in addition to a disposable protective gown for cabin crew, which is fitted over their uniforms, in addition to safety glasses, gloves and a mask.

Onboard, all Qatar Airways passengers are provided with a complimentary protective kit. Inside a ziplock pouch, a single-use face mask, large disposable powder-free gloves and an alcohol-based hand sanitiser gel are offered. Business Class customers also receive an additional 75ml sanitiser gel tube. In addition, for aircraft equipped with Qsuite, Qatar Airways’ award-winning business seat, Business Class customers are offered even greater privacy with sliding partitions and fully closing doors, and an option to display a ‘Do Not Disturb (DND)’ indicator if they wish to limit their interactions with cabin crew.

Since the start of the COVID-19 crisis, the airline has also applied other additional health and safety measures on-board its flights. Business Class meals are served covered on a tray instead of a table set up, and a cutlery wrap is offered to passengers as an alternative to individual cutlery service, in an effort to minimise contact between crew and passengers. Qatar Airways has also introduced single-use menu cards and sealed refreshing wipes. Economy Class meals and cutlery are served sealed as usual, and menu cards have been temporarily discontinued. All social areas onboard the aircraft have been closed adhering to social distancing measures.

HIA, the airline’s hub in Doha, has also introduced UV-C disinfectant robots which are fully autonomous mobile devices emitting concentrated UV-C light, and are deployed in high passenger flow areas to reduce the spread of pathogens. The Oryx Airport Hotel at HIA has also implemented UV-C light to monitor and ensure a thorough cleaning process across all rooms, using a pen only visible under UV light to mark frequent touchpoints. The marked areas undergo the highest levels of sanitisation before being checked and analysed, allowing the hotel management to further enhance its cleaning techniques and standards.

In addition, HIA has implemented stringent cleaning procedures and applied social distancing measures throughout its terminals. All passenger touchpoints are sanitized every 10-15 minutes and every boarding gate and bus gate counter is cleaned after each flight. Hand sanitizers are provided at immigration and security screening points.

The national carrier of the State of Qatar now operates over 650 weekly flights to more than 90 destinations, providing more flexible travel options to more global destinations than any other airline. A multiple award-winning airline, Qatar Airways was named ‘World’s Best Airline’ by the 2019 World Airline Awards, managed by the international air transport rating organisation Skytrax. It was also named ‘Best Airline in the Middle East’, ‘World’s Best Business Class’, and ‘Best Business Class Seat’, in recognition of its ground-breaking Business Class experience, Qsuite. It is the only airline to have been awarded the coveted “Skytrax Airline of the Year” title, which is recognised as the pinnacle of excellence in the airline industry, five times. Its home and hub, HIA, was recently ranked ‘Best Airport in the Middle East’ and ‘Third Best Airport in the World’ by the Skytrax World Airport Awards 2020.