Parrotfish Now Protected By Law in the Maldives: Critical to Reef Health 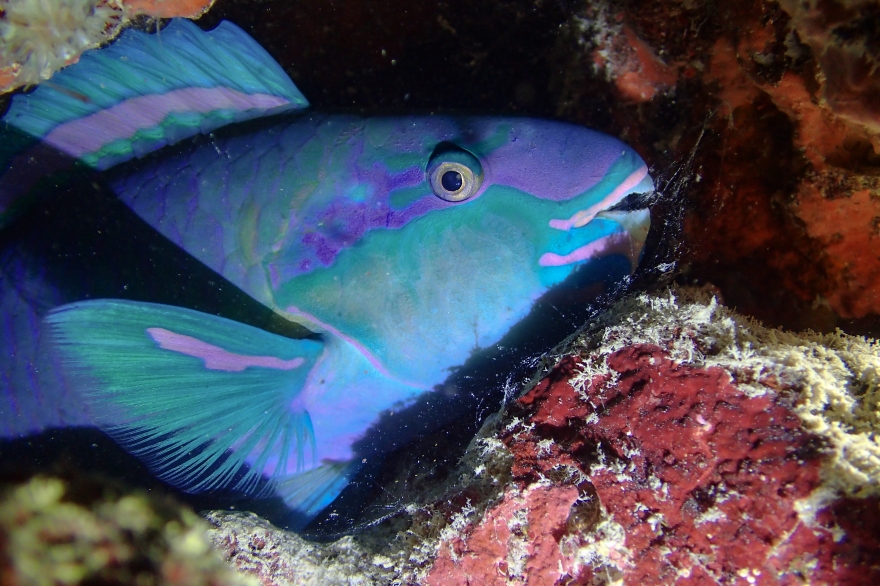 The colourful and charismatic parrotfish are responsible for producing up to 80 per cent of the sand on outer reefs that replenish Maldivian beaches and lagoons
PUBLISHED October 15, 2020

The Parrotfish has been added to the “prohibited species” list in the Maldives, making it illegal to catch these colourful, charismatic fish. The last time a coral reef fish was protected in the Maldives was in 1995 – the napoleon wrasse.

The new protection, which was approved by the Ministry of Fisheries, Marine Resources and Agriculture, came two months after the #FishForTomorrow campaign, run by the Maldives Resilient Reefs Project of the Blue Marine Foundation. The social media campaign, highlighting the importance of parrotfish to the health of Maldivian coral reefs, was backed by a number of local organisations, celebrities, fisheries scientists and members of the fishing community.

The new Maldives General Fisheries Regulation (2020/R-75) by the Ministry of Fisheries, Marine Resources and Agriculture, stipulates that effective as of September 24, 2020, it is illegal to catch, kill or keep all species of parrotfish. As of March 1, 2021, it will no longer be allowed to trade, or display parrotfish or items made from any of its parts in shops and public places.

Shaha Hashim, Maldives Project Manager at Blue Marine Foundation, said: “Abundant and diverse populations of parrotfish are critical to allow our reefs to recover from threats that compromise their health such as coral bleaching. Our reefs have weakened over time and these threats are predicted to increase in frequency and intensity over time. Ensuring our reefs are healthy will allow us to protect ourselves and our islands from rising sea levels.”

Parrotfish are colourful and voracious herbivores that spend up to 90 per cent of their day eating algae off coral reefs with their beak-like teeth. This grazing action creates space for coral larvae to settle and promotes coral growth while also preventing coral reefs from becoming overgrown with algae. They are also responsible for producing up to 80 per cent of the sand on outer reefs that replenishes Maldivian beaches and lagoons.

Professor Callum Roberts is a Professor of Marine Science at Exeter University in the UK and has studied coral reefs for more than 25 years.

Callum said: “Research has shown that reefs with low numbers of parrotfish recover much slower than reefs with abundant parrotfish. I commend the Maldives government for this progressive step to protect their coral reefs and boost their ability to bounce back from damage.”

Traditionally, parrotfish were rarely targeted for consumption in the Maldives. However, over the past decade they have started to appear in large numbers in fish markets and shops in Malé.

Yoosuf Abdul Rahman, a local fisher from the island of Kaafu Dhiffushi noted: “I have been a reef fisherman for the past 20 years and I have seen an increase in the number of fishers targeting parrotfish. A lot of young people are now catching parrotfish in large numbers on recreational fishing trips.”

Fishermen have reported declines in the catch of parrotfish, prompting them to support protective measures.

Zuhair, a reef fisherman from Kaafu Huraa island stated: “I have been fishing for a long time and have seen the decrease in number of parrotfish being caught. I haven’t been able to catch a single parrotfish in three weeks. There is a definite need for protection as a decline has been observed throughout North Malé Atoll.”

There are encouraging reports from workers at Malé fish market which suggest that some fishers have stopped fishing parrotfish since the ban.

Ali Hassan, a fisherman who sells his catch to Male’ fish market said: “During COVID-19, I think the number of recreational fishers targeting parrotfish doubled in Malé Atoll. However, over the past two weeks since the ban there has been a decrease in the number of parrotfish being brought here.”

Blue Marine Foundation hopes that the review of fisheries management plans by the Maldivian government could result in further conservation "wins” in the near future.

Maldives Resilient Reefs is Blue Marine Foundation’s project in the Maldives. The project aims to rebuild Maldivian coral reefs as climate resilient ecosystems for the benefit of people, nature and the economies that depend on them.

Known as BLUE, The Blue Marine Foundation is a UK registered charity set up in 2010 by some of the team behind the award-winning documentary film ‘The End of the Line’. BLUE aims to restore the ocean to heath by addressing overfishing, one of the world’s biggest environmental problems. BLUE is dedicated to creating marine reserves, restoring vital habitats and establishing models of sustainable fishing. BLUE’s mission is to see 30 per cent of the world’s ocean under effective protection by 2030.