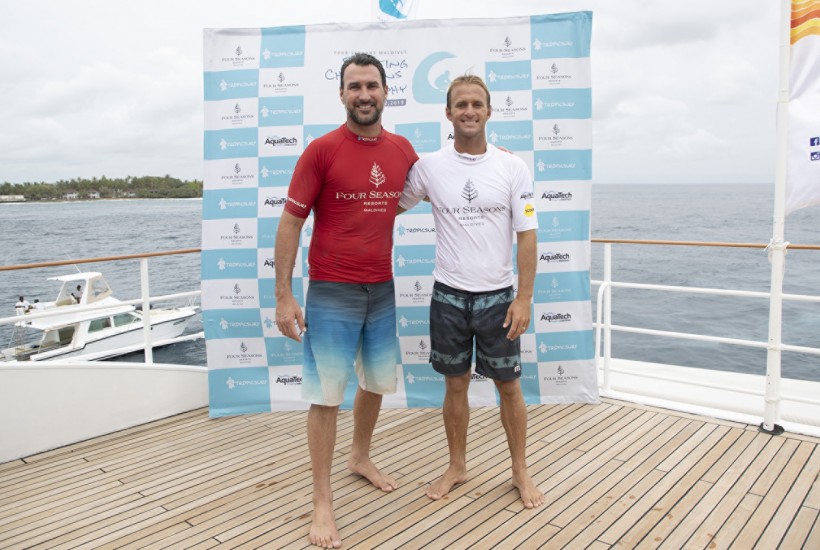 The twin-fin division of the Four Seasons Maldives Surfing Champions Trophy was run and won in clean head-high tubes at Sultans this afternoon, with competitors reveling in the dreamy conditions on offer at the right hand point break. After meeting in the final of the single-fin division on Thursday, it was again Australians Joel Parkinson and Josh Kerr who squared off in the last heat today to decide the twin-fin champion for 2019. 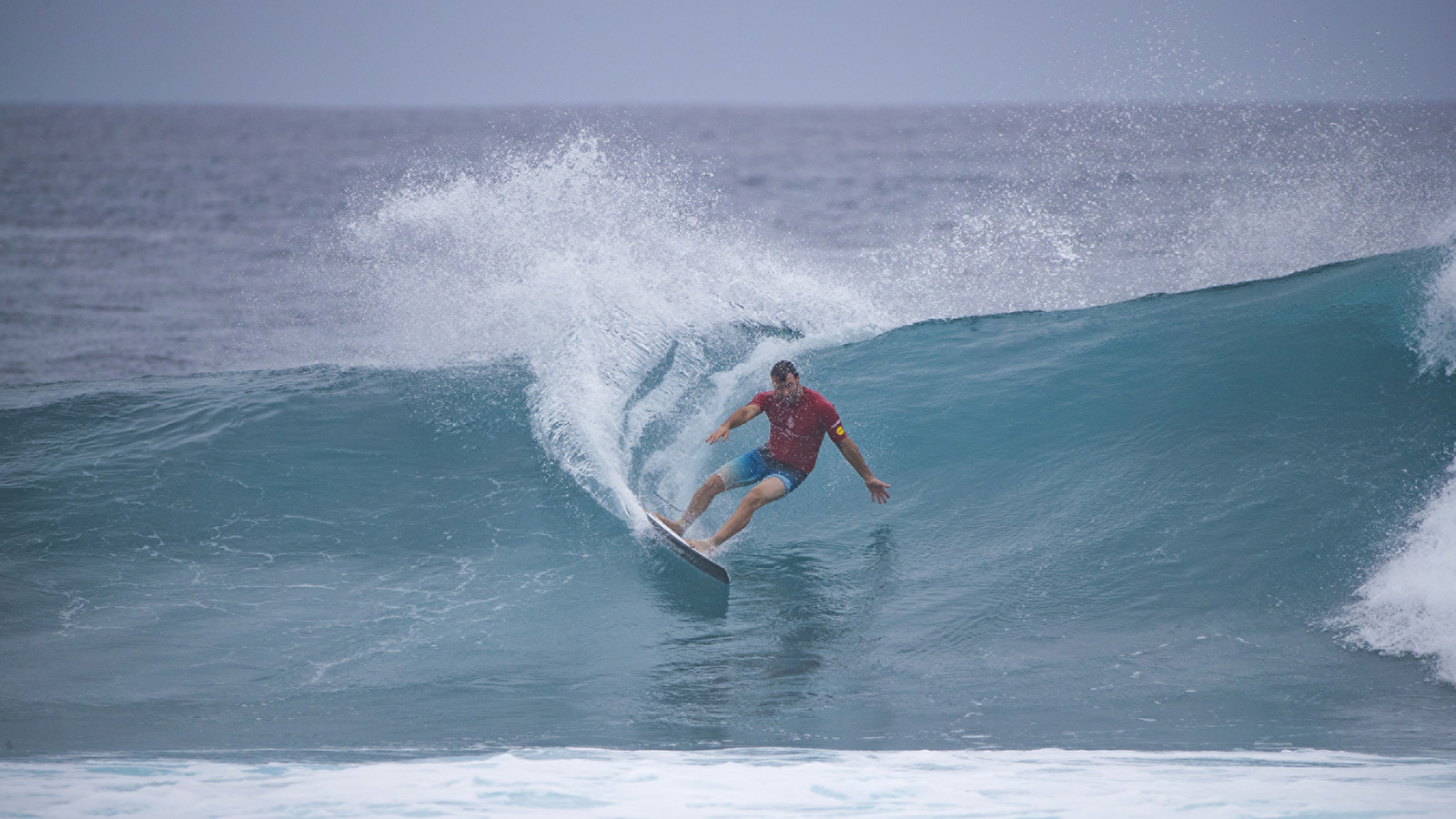 After an incredible afternoon of surfing blessed with the cleanest waves of the window so far, the final was the icing on the cake as Parkinson and Kerr went back and forth, exchanging long tubes, vicious turns and the lead a number of times. There could only be one winner, however, and as the final hooter sounded it was 2012 world champion Parkinson who gained his revenge for the earlier single-fin loss with an incredible 17.36 two-wave total to better Kerrs 16.64, and claim the second of the three divisions. Parkinson did the damage with consecutive waves at the halfway mark, backing up an 8.33 with a 9.03 for a long, double-barrelled drainer. With Kerr already sitting on an 8.67 he spent the rest of the bout on the hunt for an almost identical 8.69, and although he had a number of opportunities he couldnt quite overhaul his fellow Queen slander, a 7.97 the best of his attempts as the waves continued to cook.

"That was amazing," said Parkinson, "Wave after wave after wave. Theyre the finals you dream of. There were two waves in every set, which was even better. You could get back to the top and say, you have the first one, Ill have the second one! It was an amazing day of surfing. The whole Four Seasons experience has been incredible, the hospitality, the staff and just how luxurious it is, its really something I could get used to. I see myself and the family spending a lot more time here in future." 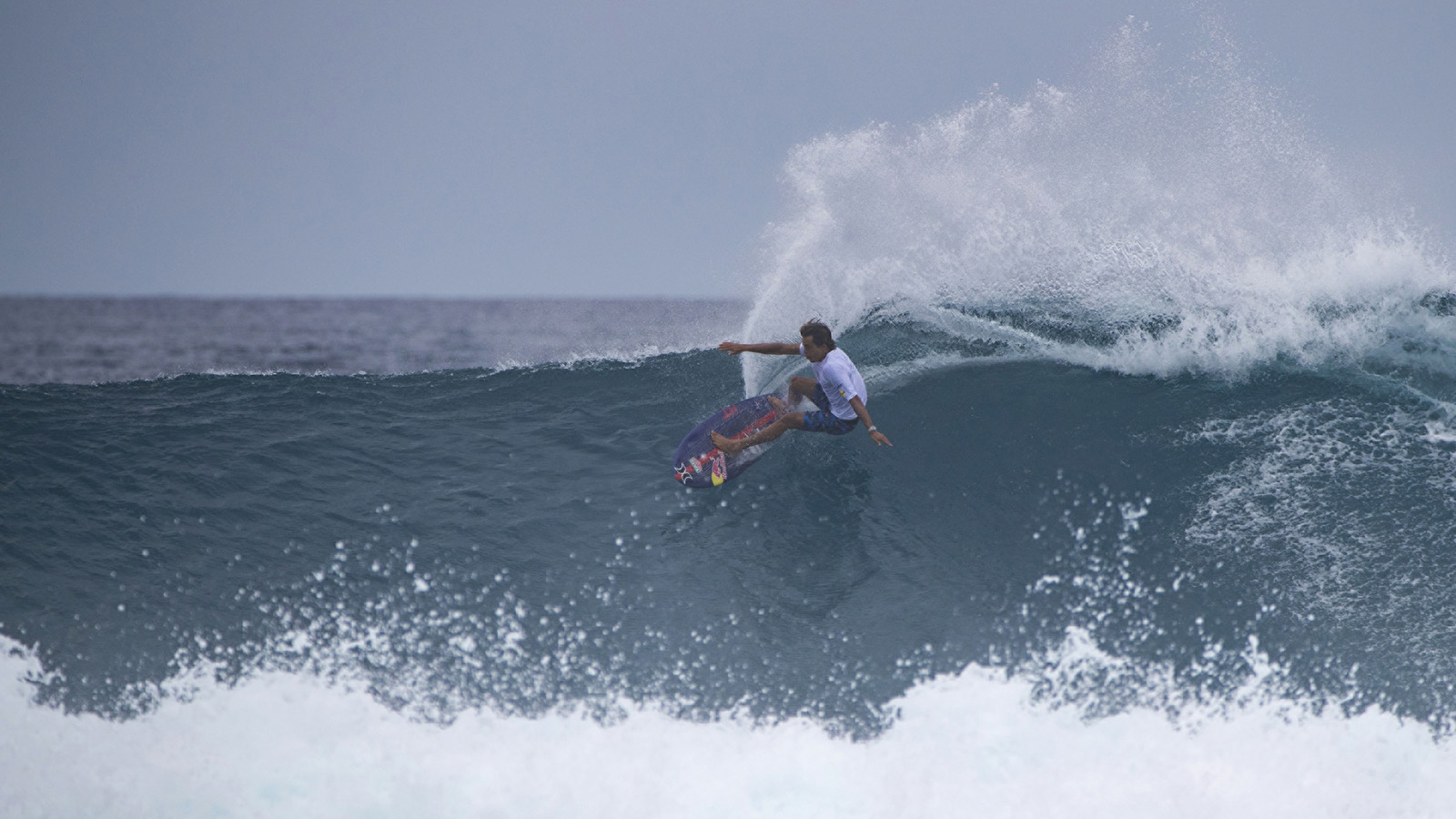 Kerr rode the final on a surfboard he borrowed from Hawaiian Kai Lenny, after knocking a fin out in his semi-final showdown with Matt Wilkinson. "Obviously I would like to have been on my own board, especially as the waves got so good during the final. Theyre easily the best conditions weve had so far; it was epic. Obviously Joel was in rhythm, whereas I probably was forcing it a bit hard on a board that wasnt built for me. Im really looking forward to tomorrow though, we could be finishing with a bang if conditions hold up."

The first semi-final was the days slowest heat, Parkinson accounting for Lenny on the strength of an 8.27 and a 7.00. Lenny had a 7.07 on his opening wave but couldnt find a backup, and was forced to settle for a third place. Things heated up in the second semi-final as Wilkinson, famed for his incredible backhand, unleashed a string of sizzling re-entries to lock in the highest scoring wave of the day, a 9.17. Kerr countered with a 7.60 and an 8.17 to narrowly edge in front. With Wilkinson chasing a 6.60 to make the final he came up agonizingly short, missing out by 0.1 in the closest heat of the event so far. 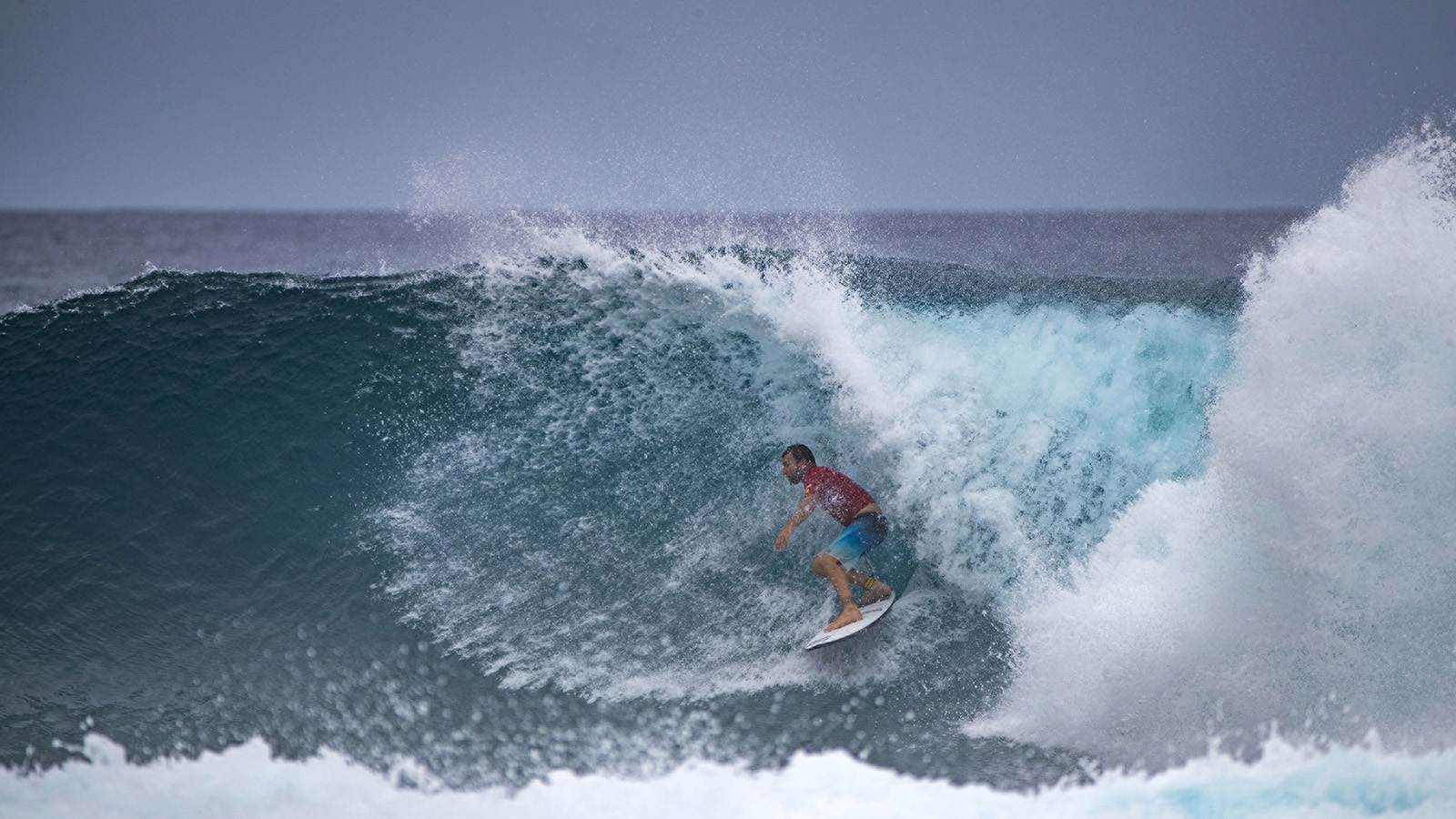 Due to Wiggolly Dantas (BRA) having to withdraw from the event, Kerr and Parkinson received first round walk-through today. In the second of the three-man round one heats, Wilkinson and Kai Lenny defeated local wildcard Mohamed Fayaz, who was thrilled to once again come up against some of surfings icons. "Its such a great opportunity to me to get to surf with some of the legends of the sport," said the man who is nicknamed Pelé. "Its a dream come true, Im so happy! I wasnt nervous at all; I was just excited. I had so much fun. The guys have all been so nice and so friendly; its been really special. Maldivian surfing is getting better and better, and hopefully through me getting a chance to compete in this event I can show some young kids of the level that it is possible to get to." 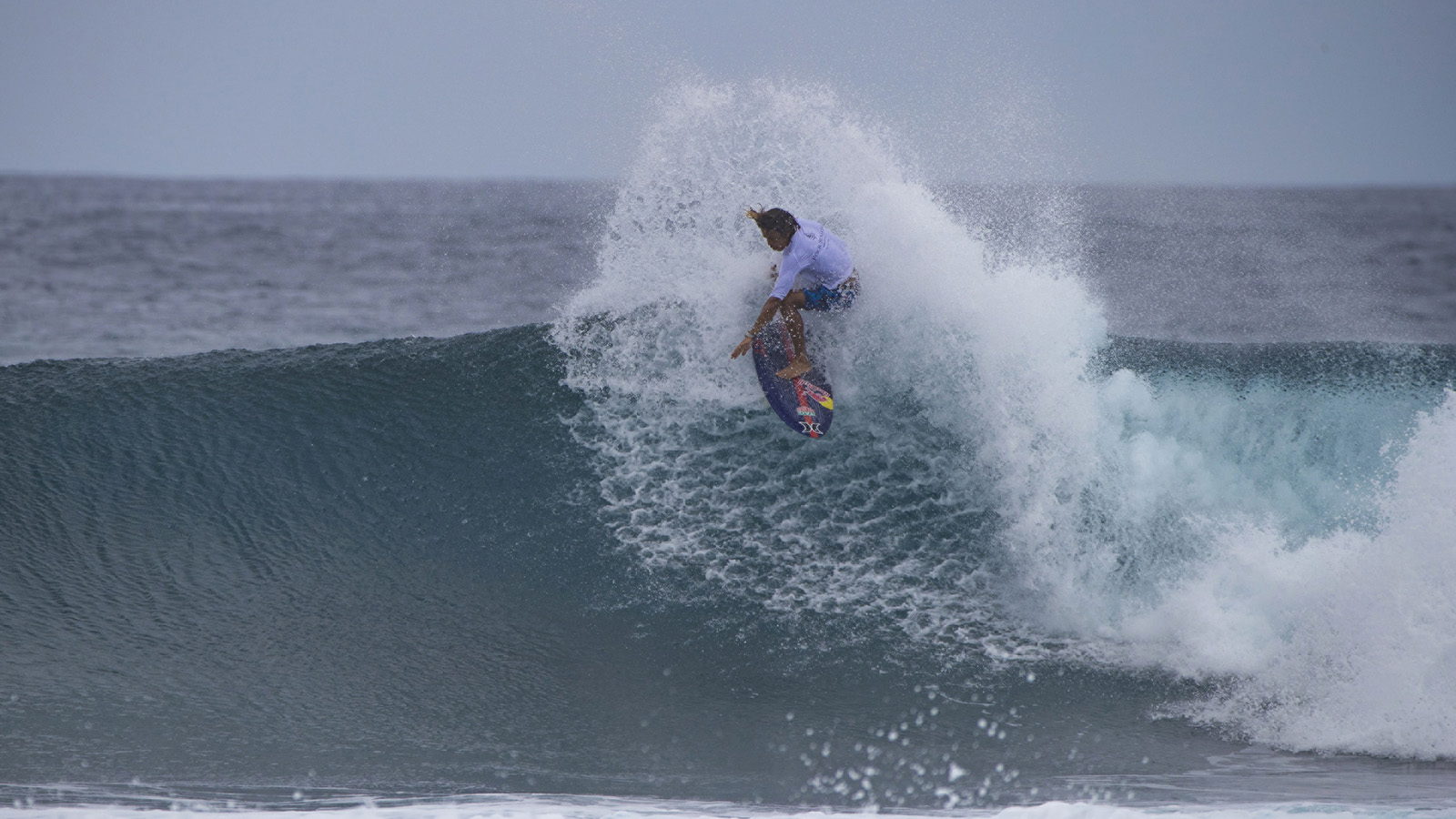 Conditions are primed for an epic final day tomorrow as the surfers revert back to the modern weapon of choice, the thruster. At the end of that division a grand final will be contested by the two surfers with the highest points, and while Kerr and Parkinson each have one foot in the ultimate showdown, Wilkinson, Lenny and Fayaz are all still within striking distance. Were all set for a great day, stay tuned!

The Four Seasons MAldives Surfing Champions Trophy is hosted aboard Four Seasons Explorer â€“ the Maldives ultimate surf vessel. Fans can get up close to the action with onboard VIP passes while the surf tour experience continues with nightly events back at Four Seasons Kuda Huraa, which plays host to the contests competitors, judges and Tropicsurf partners.