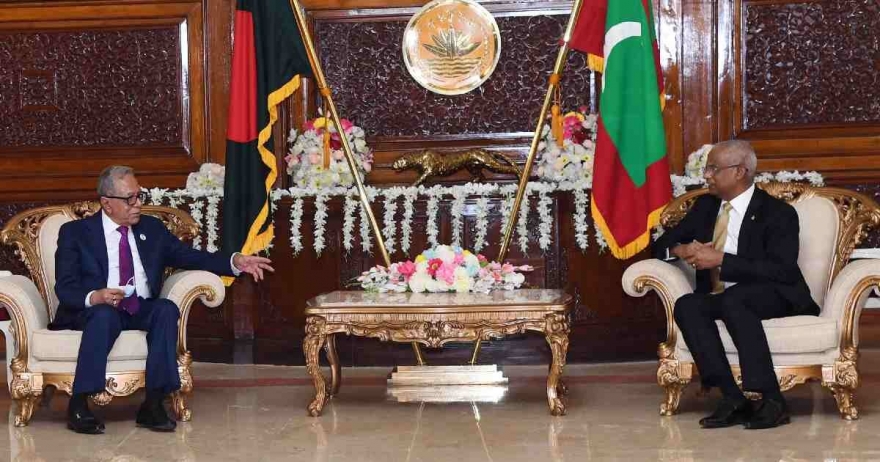 Maldives President Ibrahim Mohammed Saleh's recent visit to Bangladesh has added multidimensionality to the two countries. Because the country has expressed its determination to work together with Dhaka on bilateral, regional and international issues. Not only that, a total of six Memoranda of Understanding (MoUs) has been signed between Dhaka-Male within a month; Of which four have been completed in the presence of the President during his visit to Dhaka to mark the Birth Centenary celebration of Founder of Bangladesh Bangabandhu Sheikh Mujib in March.

The Indo-Pacific Strategy (IPS), a new dimension in the region's diplomacy, shares Bangladesh's ideological aspirations with Maldives, the geopolitically important country. For this reason, the country intends to work together with Bangladesh while maintaining peace and stability. At the same time, the two countries have agreed to increase connectivity by air and sea.

Maldivian President Ibrahim Mohammed Saleh arrived in Dhaka on a two-day visit on the occasion of Bangabandhu's birth centenary and golden jubilee of independence. During his bilateral meeting with Prime Minister Sheikh Hasina, four MoUs were signed between Bangladesh and Maldives. The memoranda include the formation of a Joint Commission (JCC), regular meetings at the Foreign Secretary level, assistance in the extraction of marine resources and cultural exchanges.

In addition to First Lady Fazna Ahmed, the Maldivian President was accompanied by 28 guests, including Foreign Minister Abdullah Shahid and the Minister for Economic Development.

The Maldivian president's visit added a new dimension to the ongoing goodwill between the two countries. This is especially a reflection of Bangladesh's geopolitical importance in the region and the support it has from neighboring countries. This visit provides an opportunity for the Maldives to support Bangladesh's rivalry over connectivity in the Indian Ocean.

Saleh congratulated Bangladesh for its economic progress and socio-economic development by celebrating the Golden Jubilee across the path of friendship. He also expressed his gratitude to Bangladesh. Highlighting the assistance of Bangladesh, provided to the Maldives during the coronavirus epidemic, Saleh said the Maldives is grateful for the friendship of the people of Bangladesh. This friendship is helping us to meet the challenges posed by the epidemic. This cooperation is a sign of friendly relations between the two countries.

On the second day of the visit, the two leaders held a private meeting before the bilateral meeting. Later, in their presence, a memorandum of understanding was signed on four issues, including the formation of a joint commission to strengthen overall cooperation between the two countries. In addition to emphasizing on enhancing communication and trade between Dhaka and Male, the two countries also agreed to sign a preferential trade agreement at a bilateral meeting chaired by the two leaders.

After the Sheikh Hasina-Saleh meeting, the two foreign ministers of the two countries came to the joint press conference at Hotel Intercontinental in Dhaka in the afternoon. AK Abdul Momen and Abdullah Shahid. Abdul Momen said the two countries have agreed to operate direct ships and flights to the Maldives. Bangladesh and Maldives have agreed to sign a Preferential Trade Agreement (PTA) to boost trade and investment.

On the other hand, Abdullah Shahid said the country welcomed Prime Minister Sheikh Hasina's announcement to increase connectivity. We want to increase communication by air as well as by sea. We will work to maintain peace and stability in the Indian Ocean. Shahid also promised that Maldives would stand by Bangladesh in resolving the Rohingya crisis.

Meanwhile, a joint statement issued by the two countries said that Bangladesh's support for the Maldivian Foreign Minister as President of the UN General Assembly this year has been confirmed. On the other hand, Maldives will support the Bangladeshi candidate for the post of Regional Director of the World Health Organization's Southeast Asia Regional Office for 2023.

We can say, this is the sign of eternal brotherhood between Bangladesh-Male.  Even though the Maldives is a small island state, it has a geopolitical significance. Bangladesh got multi-dimensional benefits during the visit of Maldives President to Dhaka. We have always good relations with the Maldives. This visit has created an opportunity to strengthen this relationship. The agreements reached between the two countries strengthen the relationship between the two countries and reflect the geopolitical importance of Bangladesh in the region and the support that neighboring countries have for Bangladesh

There are huge sectors of potentials to work together such as tourism, tackling covid-19, counter-terrorism approach, maritime cooperation, Climate change issue, fishing, supporting each other at common regional and international fora. Maldives always supports the stance of Bangladesh regarding Rohingya refugees’ repatriation, relocation of Rohingyas to Bashanchar. These are very appreciable.

The Maldives bilateral relations with Bangladesh and the maritime cooperation with Bangladesh in the Indian Ocean in terms of a regional cooperation or connectivity will give a new dimension to Maldives' assistance there. Bangladesh is going to become a full member of Colombo Security block.  All in all, it will benefit mutual diplomacy and the economic and other interests of bilateral relations between both parties. The Maldivian economy is not very big, but it has geopolitical advantages and diplomatic importance.

The people of Bangladesh and Maldives will be befitted ultimately. Bangladesh-Maldives ties would be more fraternal.